Where it all began

It is his passion for design and attention to detail that has led to the brands reputation for delivering high quality contemporary kitchens to beautiful homes. 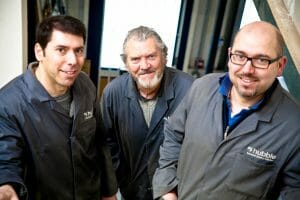 The road to beautiful kitchen design

By 2011, Hubble had grown into a successful family business, with Richard’s engineer Father (who had a short-lived thought about retirement, and had recently sold his own successful business creating string instrument bows, called P&H (Parkyns & Hubble)) and brother joining the team.

Richard decided that it was time to open a Hubble factory in the charming county of West Sussex, designing and building their own luxury kitchens.

A few years later the exceptional design work of Richard and his team was recognised and desired by both contractors and homeowners. In 2014, it was an exciting time for Hubble as the brand partnered with contemporary kitchen suppliers alongside opening their first showroom in Chichester. After a successful showroom launch in Chichester, Hubble decided to open their second showroom in Guildford. The showrooms have brought some of the best contemporary German kitchen manufacturers to the high street.

Our team are excited to be opening a new contract showroom in Chichester this year, as the company continues to grow in the interior design industry.

Hubble has been recognised for designing personalised, elegant and innovative kitchens for private homeowners, architects and property developers. The team proudly won the Global Kitchen Design award in 2018, a worldwide competition for the best kitchen design and were shortlisted for the BKU awards kitchen showroom and independent retailer of the year categories.

The team continue to produce breath-taking kitchen designs alongside bespoke bedroom wardrobe solutions and modern living room furniture. Start the journey to your dream home with the team at Hubble. We can plan and go through options via phone, e-mail or a virtual video system of your choice such as Zoom.

Steph Tanner2021-04-23T14:01:47+01:00
Page load link
Manage Cookie Consent
To provide the best experiences, we use technologies like cookies to store and/or access device information. Consenting to these technologies will allow us to process data such as browsing behaviour or unique IDs on this site. Not consenting or withdrawing consent, may adversely affect certain features and functions.
Manage options Manage services Manage vendors Read more about these purposes
View preferences
{title} {title} {title}